This one was a biggie for me.  Most people that really know me, know that I’m not a big fan of heights.  I know that’s a rather strange statement from someone who is a pilot, but for me, it’s always been about “open” heights.  I don’t like looking over cliffs, tall buildings, or things of that nature, which I would argue para-sailing fits into.  That being said, it is something that I’ve always wanted to try.  A few years ago, Felicia and I went to Catalina island to celebrate our 15th anniversary, and we had the opportunity to para-sail.  I made a few excuses and managed to talk her out of it.  Even the thought of para-sailing sent me into a mild anxiety attack.

Fast forward to the cruise, and our Key West excursion.  I booked it knowing full well that I probably wouldn’t do it.  I told myself I could always make up an excuse.  Once we finished our turn on the jet-skis, we had to wait for some time while the other groups rotated.  So we just did some swimming and enjoyed the sun.  When our turn finally came to para-sail, we boarded the boat and sat down.  As is my luck, I chose the seat which would be the last one to para-sail, so I got to watch everyone go first.  Great, I thought, this would give me plenty of time to come up with some kind of excuse not to do it.  We were on the boat with a Canadian family.  There was a girl about Matt’s age that ended up going first with her Dad.  She had a look of abject terror on her face, and all I could think was that was exactly how I felt.  As they lifted off and soared over 100 feet into the air, I thought there was no way I was doing that.  When they got back down, she was smiling, albeit with a hint of terror still visible.  Everyone else cycled through until it was time for Felicia and Matt.  Of course those two aren’t scared of anything, so they had a blast.  As we had an odd number, Matt got to ride twice, so they strapped me in next to him.  They didn’t even give me enough time to object!

Once I was strapped in, we were told to sit down.  The captain quickly accelerated the boat and we gently lifted off.  They let us out about 100 yards and then slowed, so we could dip our feet in the waves.  Once again, he accelerated and we began our climb.  We got higher and higher until you really couldn’t hear anything.  It was very peaceful and the view was spectacular.  Matt knew how nervous I was and he asked me how I was doing.  I told him that it was one of the coolest things I had ever done and I couldn’t believe it took me this long to do it.  I also told him that I didn’t think this meant I was ready to jump out of an airplane, but I passed on to him what I hoped was a bit of fatherly wisdom.  I told him to make sure that he doesn’t let his fears get in the way trying new things, like I’ve done so many times in the past.  As we floated around for a few minutes, we spotted a giant sea turtle gently swimming near our boat.  It was the perfect end to the flight and they lowered us back to the boat.  I can’t wait to do it again. 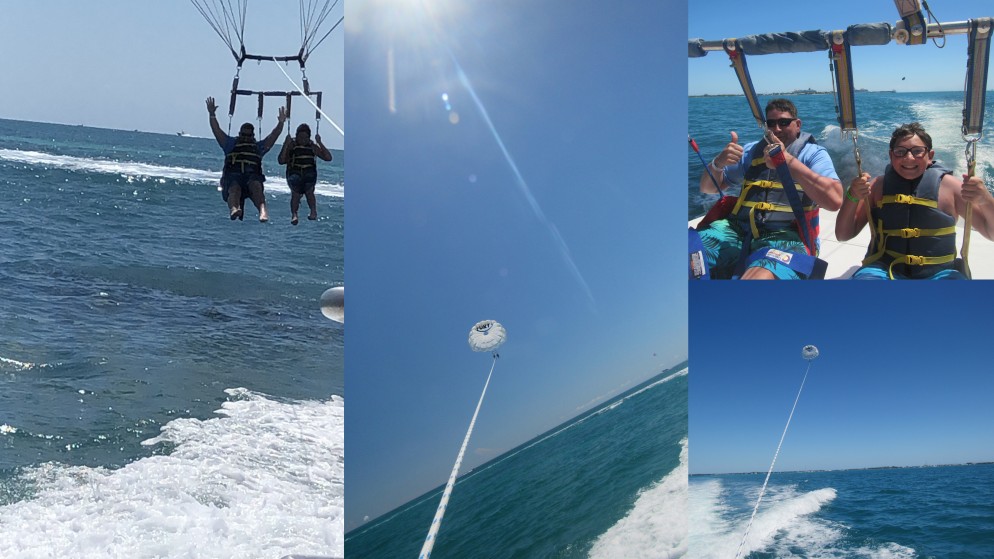